Our Attitude towards GIRLS

We live in a society where a woman's character and personality is judged by her attire and appearance whereas a man is judged by his words, actions and thoughts. Sad, but true.

These lines I read somewhere on facebook. I think a girl wrote these lines below her pic expecting that she will get some extra likes because of these lines.

But when I read these lines carefully, (though it was very difficult to read because it was written below a pic of a girl) I found that it was written so true. We live in society where women is judged by her attire and appearance, even I am one of those who do this. But I promise that I'll change my attitude toward women.(atleast when am with an ugly girl :p). Jokes apart, we seriously need to change our self, and to learn some basic things from girls.

Who's the most famous girl in your college? I am sure that she must be most beautiful girl in your college. And whose the most famous guy in your college? he must be one with having some extra circular talent like singing, dancing or must be best sportsmen of your college. Why we do this? I really don't know. A guy expect that he'll impress all the girls with his talent, I want to ask him that 'have you ever got impressed by a girl just by her talent?' Answer is probably NO. Then why do you expect that girls will consider you. But the thing is girls will still consider you.

Suppose a good looking girl and a not good looking girl ask you for a favor, who's the one you are going to help? We all know the answer. And suppose a good looking guy and a not good looking guy ask a girl for a favor??????? She's surely gonna help the one who asked for it first or else the one who's a good friend of her. Suppose you a send a friend request to a girl, she'll first make sure that she know you and then she will accept your request. And if a guy gets a friend request from a girl he will first check that this account is real or fake, and even its fake, he'll add her to his friends list. This is sooo SAD :( (the reason for it must be that a girl rarely send friend requests) but still we have to change our attitude.

In any class room there are 3 types of students:
1: the students who sit on first two rows and don't even know who's there classmates because they never turn back.
2: A group of students having both boys and girls.
3: 75% of students are of 3rd type, they are just guys who want to talk to girls but never have enough balls to speak. And guys of 3rd type believes that the guys of 2nd types are not real guys, they are the mixed type of gender.

Its sad to tell but I am a guy of the 3rd type, our group consists major part of the class but unfortunately no girls. My friends of my group asks me why these girls talk with those guys and not with us. I want to tell them that because they make them comfortable. People think that there are 3 ways to impress a girl- money, fame and looks. BUT GUYS  TRUST ME A GIRL DOES NOT WANT ANY OF THIS. So please stop blaming girls, your attitude is cheap and you got to change that. And one more thing we all know that a boys behavior changes when a girl enters the room. They start talking louder, laughs louder and will even insult their friends to get attention of the girl. But a girl never do that. So if you say that girls are the reason behind the fights in your group, the whole universe will consider you as a NERD.

I don't know how deep this blog is going to impact you but lets make a  move to change our society. Lets not judge female by her look and what she wears. Let her judge by the nature she has. And Lets respect them because they are better human being(as i proved it by giving some examples). 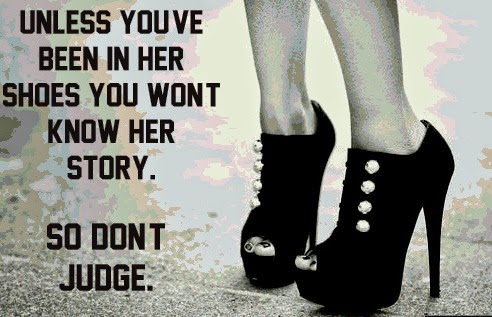