Let me tell you a story, after school, I came in Pune, and I got admitted in the best college of the city. I also got privilege to stay in college hostels. After few weeks of college, I realized that I needed a new phone just like everyone in my college had. I needed a bike too. Because of this, bitterness has been poured in my relation with my parents. They used to tell me that they sent me here to study! But if they sent me in best college they should provide me the facilities like other students of the college (that’s what I always thought in my heart).

In my hostels there used to stay some blind students too (my hostel had some reservations for disabled people). Because I was quite popular, all the people knew me, even those blind students. Rahul was the name of one of the blind student. He became a good friend of mine. Every time when they needed to go outside hostels for having food, they needed a normal person to take them to the canteen or restaurant. Sometimes even I used to help them out.

One day when I had a fight with my girlfriend, I was really upset, because I knew, that was the end of my relation with her. And in that mood I also had a fight with my parents, because they still hadn't brought me new cell phone and a bike. I was angry, disappointed and sad. That night when I was going out for some fresh air, I saw Rahul outside his room waiting for someone. When I asked him what’s going on, he insisted me to take him for the dinner. I really had no intentions to spoil the world outside me because of the world inside me. So without saying a word I gave him my hand. I took him to the dinner, after dinner while I was taking him back to hostels, he asked me, ‘what’s wrong?’ I was unable to understand why he asked that, we had a normal conversation between us for whole time. Maybe he was a very good observer, maybe he had a special talent of sensing the facts, I thought. First I wanted to tell him that everything is fine, but then I thought it would hurt his special talent. So I decided to tell him everything, everything about my girlfriend, everything about my parents and everything that was coming in my mind at that time.

As I was holding his hand to lead him, he turned my hands in a manner like he wanted to tell me, “Look at me”. And when I looked at him, I really thought that he was looking right into my eyes, for a second I believed that he can see. ‘I don’t have eyes, I can’t see. For you my world is incomplete because I don’t have eyes. But for me the world without eyes is the complete world’, he said. ‘Even if you lose your eyes someday, your life will adjust itself according to it, and then will realize that even without eyes, your life is complete’, he added.

That was the longest night of my life. The whole night I was thinking about the wisest words I have heard. The pain I had because of losing a girl, the greed of having bike and phone has vanished from my heart. In two sentences, he gave me a reason to live my life completely despite what I lose. He gave me the secret of staying happy with whatever I had. I realized that the things that I had made my world. And there is a reason that I don’t have everything, ‘I don’t need it’. 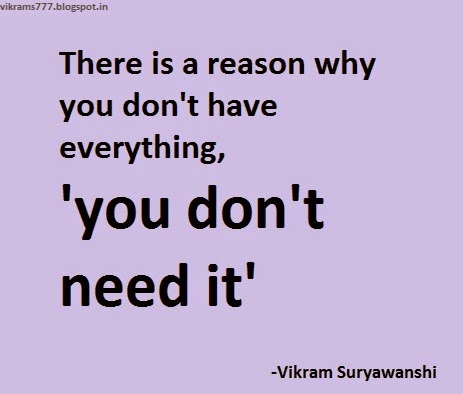 Things got changed after that, I never demanded anything from my parents; I knew that my life will reconstruct itself according to what I have. I don’t have fear of losing anything, even if I lose everything, I will have a new world with new things and it will be easier if I allow myself to become the part of new world. At every instant of time, my life is changing; I am getting new reasons to become sad and new hopes for becoming happy. Whenever I see people crying because of their past I wish I could tell them that they are wasting a part of new life by regretting on what they did in the old life. 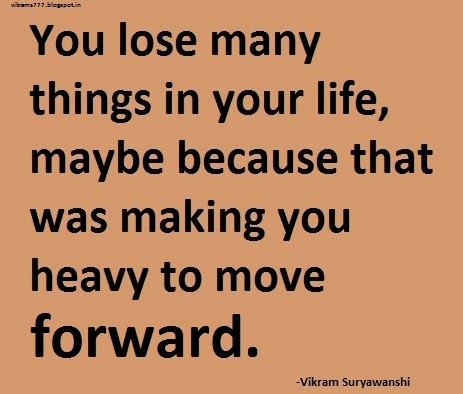