A string of false MORALS

A year ago, just after my exams, my father received a call from my uncle informing that my aunt expired. We immediately went to my hometown. I don’t know how I was feeling before I received the news, but as soon they told me about it, I felt emptiness, and that feeling stayed for a very long time. It is how we feel when we lose someone we know cared for us. A feeling like a part of us has been lost. When I was at my hometown, I don’t know why but a thought penetrated my mind that what would have happened if it was my exam period. Would my parents have allowed me to come with them? And without having a second thought I knew that the answer would have been a big ‘NO’. My parents would have convinced me to concentrate on my exam and to visit the town after my exams. I mean, there is no chance that my dad would have said. “Come with us, exams appear every year, but this more important.”

A few months ago, my brother got ill, and he got admitted at hospital for about a week (no he didn’t die; it was just some common sickness). At that period, through out that week, every night one member from the family needed to stay at hospital, just in case of emergency. After knowing this, I insisted to stay there as I know I can stay whole night awake and I got very much experience in this. And also if I feel sleepy, I can fall asleep while sitting on a chair without any trouble. It looked like this job was meant for me. So I started convincing my parents about it. But they never allowed me to do that. They were like, ‘you got college, you got studies, and you must sleep’. Every time I gave them a valid reason why I should be in the hospital at night, they would dismiss it by telling me ‘your time is important, you got your college going’. I tried for whole week, and I felt like I successfully convinced them that I am the best person to do that thing, but still they didn’t allow me.

Now if we consider that instead of me there was a normal student in these situations, he would have realized the efforts taken by his parents for his studies. No matter what happens, ‘academics and career’ of the child are the things parents give first priority to. And the child would have concentrated in his studies and he would have ended up doing job in a developed country for more money and a bright career. In future while working on a major project in a foreign country, he would receive a call from home that someone’s sick, and his family expect him at the home. At this moment at one side he is very busy in his career and at other side his family needs him, and he will ultimately ignore his parents and will concentrate on work. Because this is what his parent were teaching him from his childhood. Read this carefully, I am not saying that he will choose career over home, he won’t even choose anything, this would happen on its own, his subconscious will make him do that. Well this is what morals are about, they don’t affect our thinking; they affect our actions. I am not saying that nowadays parents are giving false morals, they are doing right thing, “making their children realize the importance of career”, but they are failing to tell them “family is more important than work.” When a machine gives an output it doesn’t know that why it’s giving that certain output, it does that because someone has programmed it for that. Same thing goes with us, we don’t know why we are doing certain things, all our actions are output of believes we have achieved throughout our life. They say that our generation is very poor in morals; I think it was our elder’s responsibility to teach us the right thing. But they are not at the fault though, because they don’t even know that they are doing any mistakes, and if you don’t know that you are doing a wrong thing then you are not a wrong thing. And they also say that the next generation will be worse, well it depends on us what we are going to teach them. 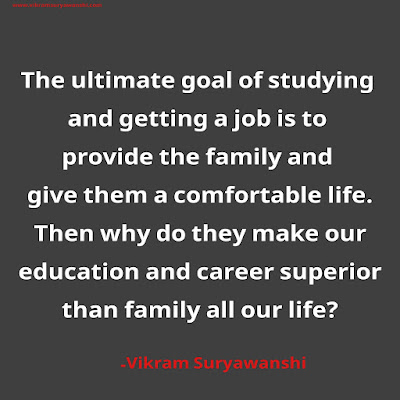